Memories of Redbrook (an extract WW1) - by Mr B Freeman.

'My first memories of Redbrook go back to the first world war. I was quite young at the time but I vividly remember the time when my uncle Peter Saunders was leaving to join the forces in France. My mother took me to my grandmothers to wish him good-bye as he left to catch the train. I remember the sadness of all the family on his leaving us.

My next recollection was the occasion of his return home after the war ended. As was usual when one of the villagers returned home safely, the station staff had placed fog-detonators on the line about a mile from the station and as the train approached, the detonators began to explode, thus warning everyone that the time had come for them to make their way to the station.

Almost everyone would do so, even the men who were working at the Iron works would stop working, collect the chair which had been fitted with long carrying poles, and hurry to the station in order that they could carry the returning warier shoulder high through the village and ultimately deliver him to his home, where great celebrations were laid on. The tears at this time were of gladness and relief at the soldiers safe return.' 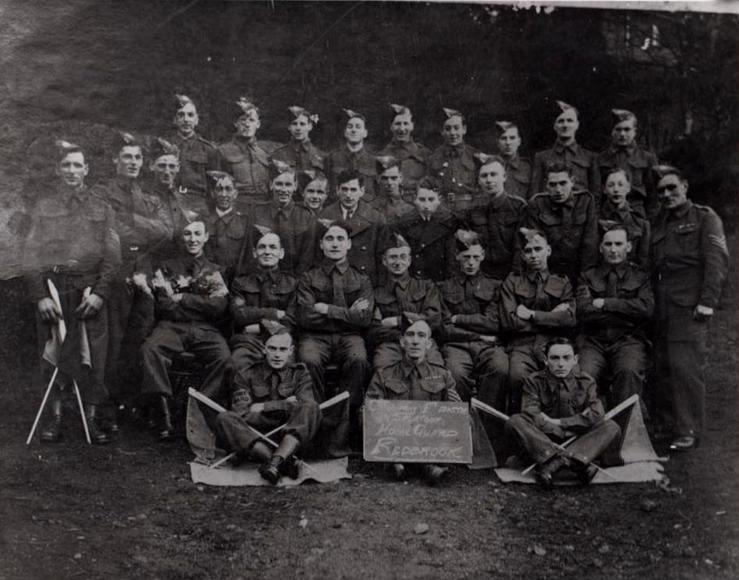 Looking at Redbrook today, it’s difficult to imagine that this attractive village on the east bank of the River Wye has hosted many hundreds of years of industrial activity – including blast furnaces for copper and iron smelting, corn and paper mills and lastly, the manufacture of the finest hand rolled tinplate sheets, known as ’taggers’, in Europe. ​
​
In the early days of 18th century, both the Upper and Lower Redbrook Tinplate Works relied on water power from the two streams.  In 1818 the Upper Redbrook Works was demolished and replaced by Redbrook Brewery, and from then on, all tinplate manufacture was concentrated in the Lower Redbrook Works.

The success of manufacturing here attracted the building of a horse drawn tram road in 1812.  This ran from Monmouth to Coleford with a self acting incline bridge which carried a branch line down to Lower Redbrook, and a spur along to the Lower Redbrook Works and the river wharf. The Bigsweir to Monmouth turnpike road was built during 1823-5 and the Wye Valley Railway in 1876.

By 1930 Redbrook Tinplate Works had three mills – Big Mill, Baby Mill and Rock Mill, all driven by two massive steam engines which both had separate coal fired furnaces.  Before oil fired installation in 1947, the vast quantities of coal required came from the Dean and Tredegar and the tin from Cornwall and Belgium which were all brought by rail.

The last Manager of the tinworks was Sidney Horton, and his son, Dr Horton wrote,
‘to stand in a rolling mill in full swing was a fearsome experience.  The heat, the smell of hot grease and human sweat, the noise of the hissing steam, the clanging of the steel bars passing into the rolls, the glare from the furnace, the sight of red hot bars being lifted and flung across the mill floor from roller to double, doubler to furnace man and furnace man back to roller, the sheer physical effort and concentration involved, all combined to overpower the senses.
The millman’s work must be classed as one of the most demanding ever accomplished by human hands. The mills ran continuously throughout the 24 hours of the day, the men working in 8 hour shifts, so each mill had 3 rollers, 3 doublers and so on…. and the physical toll on these men was heavy.’

Edith Horton wrote, ‘Redbrook Tinplate Works was the last of the hand mills in Britain to close, in 1961…..due chiefly to the fact that it manufactured the thinnest tinplate in the world.’

In 1963, Kenneth Hudson wrote, ‘Redbrook had a history of metal working ….. and it is not impossible that some of the men working tinplate here have a family connection with Redbrook and metals that has continued unbroken for several hundred years.’  And here’s a final thought from Dr Horton, ‘I remember (the village) with affection, and with the unbounded admiration for the community in which I spent my childhood.’

** If anyone is interested in the detailed process of tinplate manufacture in the Redbrook Works, we have copies of ‘The Manufacture of Tinplate at Redbrook 1930-61’ by E. Horton and ‘An Industrial History of Upper and Lower Redbrook’ by Percy Harris, please contact Glynis – glynmac51@gmail.com